Akcja Demokracja and aHang Hungary: There is nothing to cheer about today

When Orban and Morawiecki are coming back home victorious about the rule of law agreement struck in Brussels, ordinary citizens confronted by their undemocratic behavior everyday know that a “compromise” is not what Europe promised. The rule of law is not a real condition when it’s application is delayed for years. Poles and Hungarians need the rule of law defended now, not after it’s too late. Citizens from Poland and Hungary sent over 300.000 messages to european decision-makers in the recent days alone while hundreds of thousands have taken to the streets, year after year, to fight for the independence of the media, the judiciary, and their democratic systems.

If the European Parliament is serious about defending the rule of law, then it must now ensure a real protection of the common values as enshrined by the Article 2 of the Treaty of the European Union. After all, eight out of 10 people living in the EU want the budget linked to a strong rule of law mechanism that is enforced and functioning smoothly throughout the EU.

Today’s agreement is a political decision to push through the budget and sadly, the rule of law mechanism was sacrificed. The promised link between the EU budget and the rule of law conditionality has been weakened. It’s almost toothless now.

“For the citizens of Hungary and Poland, rule of law delayed is rule of law denied. This capitulation could create an indefinite delay in the rule of law mechanism coming into force and allows autocrats in Poland and Hungary to damage the democratic system and wage wars against minorities. Today’s decision also allows Orban to fund his next election with European taxpayers money and be left unpunished for his abuses.” – said Enikö Toth, campaigner at aHang.

“On paper the mechanizm looks fine but it’s now become an empty piece of paper. Although decision-makers today stressed that the compromise is non-binding, the odds are that tomorrow it will likely become political reality. There is nothing to cheer about today  – quite the contrary and worse still, European politicians betrayed the cause they claim to defend.” – said Oktawiusz Chrzanowski, campaign director at Akcja Demokracja.

It is now urgent for the Members of the European Parliament to ensure that a real conditionality mechanism is not another Article 7 story to let Orban and Morawiecki off hook for them to continue to oppress the people of Poland and Hungary whilst Europe pretends to be in shock about what is happening in those two countries – again and again and again.

About Akcja Demokracja (Democracy Action) was created in 2015 and is a multi-issue progressive citizens movement. It counts over 300 000 members who take action to defend democracy, the rule of law, human rights, climate actions and social justice. Since 2015, hundreds of thousands of citizens have signed petitions and have taken to the streets to protest against the takeover of the judiciary system. Over 62 thousand polish citizens  signed a petition against attacks on the independence of judges, more than 26 thousand appealed to the European Commission to take action against the “muzzle act” that abolishes judicial independence.

About aHang (theVoice) came to life in 2018 and today is Hungary’s largest civil movement campaigning with a focus on the rule of law and democracy in Europe. Over the past three years, hundreds of thousands of Hungarian citizens have stood up for the rule of law through aHang’s petitions, demonstrations and actions. 110,000 people signed a petition and 40,000 took part in an online demonstration against the government’s unlimited mandate during the COVID period. Further hundreds of thousands have joined campaigns against institutionalized corruption, the overtaking of the media, the destruction of independent culture, the unilateral transformation of education, and the harassment of civil society and refugees by the Hungarian government. 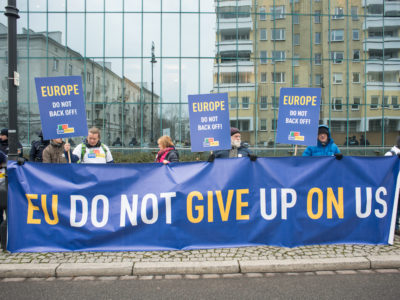