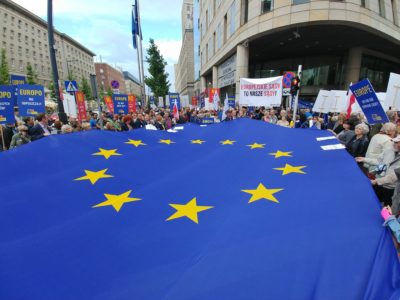 Joint action from Poland and Hungary to counter dividing Europe

Activists from Poland and Hungary massively oppose the anti-European declarations of Orban and Morawiecki. They have already sent more than 252 533 messages to the representatives of EU member states, alarming the main European media outlets as well. (Read full text below).

In the polls (Eurobarometer), the prevailing majority of citizens of Poland and Hungary - and entire Europe - are supporting a proposed mechanism conditioning EU funds transfers to member states upon abidance of the rule of law by each member state [1].

“On the eve of the Euro Summit, we call not only on European leaders but, through major European media outlets, also on European citizens to consider this message: this veto is not in our - Hungarians’ and Poles’ - name. We need your solidarity to overcome the efforts of Orban and Morawiecki, who want to divide Europe,” said Máté Varga, executive director of aHang (Hungary).

As civic movements from part of Europe heavily affected by the totalitarian regimes, we hope European leaders will take a firm stance in defending the common values of the European Union, including the rule of law. At the same time, we are concerned by the idea of dividing Europe again, as proposed by the Dutch Prime Minister and some other European politicians [2].

We urge the European media to inform and alarm European public opinion about the anti-European policies of the Polish and Hungarian governments and their consequences for the entire European project.

Full text of letter being sent by Polish and Hungarian activists to the Ambassadors of all EU states as well to the european media outlets:

Honorable Representatives of the Member States of The European Union,

I would like to inform you about the enormous civic engagement of Hungarians and Poles in defence of the rule of law, democratic institutions, judiciary independence, prosecuted judges and minorities in Poland and Hungary. Together with thousands of activists from Poland and Hungary, we are looking forward with hope for a strong stand coming from all member states in negotiations of the mechanism which connects EU funds with the rule of law standards in the entire Union.

By waving European flags during mass demonstrations, defending Polish and Hungarian courts from being taken over by the ruling party, signing massive petitions to the European Commission (over 1.36 mln signatures) and donating for a message to the European leaders, published in Politico along with activists from Hungary and Romania, we stand firmly to say: we do not agree with vetoing the EU budget and recovery funds by the Polish government.

We call on each of the EU member states not to succumb to the blackmail from the Polish and Hungarian governments. We support a strong “Funds For Rule of Law” mechanism and we trust that it is going to protect us against authoritarianism. We believe it will protect the future of the entire foundation of the European Union.

PS copy of this message is delivered to the main European media outlets as I believe that strong protection of common values lies not only in interest of Poles and Hungarians but all EU citizens.

--
aHang /theVoice/ (Hungary) and Akcja Demokracja (Poland) are multi issue, civil movements, jointly campaigning on the rule of law and democracy in Europe.

[2] 77% of Europeans insist EU funds be linked to respect for Rule of Law, https://www.europarl.europa.eu/news/en/press-room/20201016IPR89545/77-of-europeans-insist-eu-funds-be-linked-to-respect-for-rule-of-law

[3] Could we found a new EU without Hungary and Poland? https://euobserver.com/opinion/149470